Man who surrendered has no regrets

Part two of two
Part one: The Long Journey


When Johnny Angel Martinez was released from prison just before Thanksgiving 2008, he was separated from his wife and jobless.

He moved to Santa Cruz County, where he attended Cabrillo College and volunteered at Barrios Unidos and other organizations helping at-risk youth. The work was exhilarating and helped pull him through an otherwise tough time.

He recalls that one day, while volunteering at an alternative school housed at Barrios Unidos in Santa Cruz, he counseled a member of his once-rival gang who had been caught with a knife at school.

The youth asked Martinez why he would help his gang’s enemy.

“Why do you even care about me?” he said.

Martinez replied that he was not a gang member any more.

“The reason that I care is because you’re … a human being,” Martinez said.

Martinez not only convinced the boy to hand over the knife, he said he also talked him into staying until police arrived.

“You made one good decision,” Martinez told him. “If you keep on making good decisions, good things are going to come out of it.”

The contrast between the boy’s behavior and his own stung.

“Here are 15-year-old kids doing the right thing based on the information I’m giving them,” he says now. “I needed to practice what I preached.”

As his counseling career began to take off, the Williams Road slaying continued to haunt him.

He spent a year debating whether to follow his own advice and turn himself in.

He made excuses, he says, telling himself he could not willingly abandon his children, leave them fatherless while he served a long prison sentence. Why should they suffer for his past? But he also wanted to set a moral standard for his children.

Opposing thoughts nagged as well: If his role in the slaying was discovered, would it bring shame to the community organizations he worked with? If he ever decided to remarry, would the police come knocking and end the dream?

But more than any of those things, something deeper nagged at Martinez, a voice that wouldn’t be silenced, telling him he had to face what he had done.

Without fully understanding why, the inner voice simply told him he had to.

The act of surrendering was, he would later realize, what a normal person with a normal sense of responsibility would do.

The idea of sacrifice

In the summer of 2010, he spent several days meditating on the notion of sacrifice — “being able to give up everything that I know and I love” — while sitting in a park on Acacia Street in South Salinas.

Then one August afternoon, he stood up and began walking.

“I had one objective on my mind and that was ‘Get there.'”

As he made his way north along Main Street toward the Salinas police station, it seemed as if every temptation came along to try to turn him around.

A car full of relatives pulled up beside him.

“I felt like something was trying to do everything it could to stop me, because my nieces are like ‘Hey, Uncle Johnny!”‘

After that, the cousin he lived with drove up.

“And I just wave him off. I just put my head down and I’m walking … I remember this is the only thing I did tell myself: If I’m about to turn myself in, I want to smoke a cigarette.”

He bummed a couple of smokes before he passed the Steinbeck Library on Lincoln Street, two blocks from the police station.

Once he faced the mirrored-glass doors, he took a drag, set his cigarettes carefully on the edge of a concrete stair, and stepped inside.

Police interview transcripts show he at first tried to take the full rap, claiming that he was the shooter.

“So what’s goin’ on?” a detective asked as Martinez took a seat.

“I was involved in a homicide,” he said.

“You were involved in a homicide.”

“OK,” the detective said, “how were you involved in a homicide?”

Martinez hadn’t thought at all about what he would say. His aim had simply been to make it there without turning back.

He tried to convince the detectives he was the trigger man and could see the cops knew better. They had other sources, they said.

The officers did believe him when he at last admitted he was the driver.

Finally, another detective entered the room and said, “Can you stand up for me?”

Martinez whistled as the officers cuffed his hands behind his back.

While Martinez was confronting his own past, the gang had not forgotten his mother’s brazen act of testifying against its members a decade earlier.

Meanwhile, Martinez was detained on parole violation, but by the fall of 2010, he faced a felony murder charge.

The felony murder rule holds all participants in a felony crime, such as a robbery, responsible for any homicide that results no matter their role.

In sentencing terms, it was the same as if he’d committed a first-degree murder.

“The next thing I know,” his former probation and parole officer Dan Villarreal says, “(Johnny) wrote me a letter telling me he turned himself in because he felt if he was going to continue his work with youth it was important that he start with a clean slate and not worry about things he had done in his past.”

“This really didn’t come as a big shock to me,” Villarreal says.

Little by little, Martinez began to understand why he had to turn himself in, why justice demanded it, the community expected it and why the victim’s family needed it.

He says he even began to understand the rationale behind the felony murder rule.

“The moment I pulled over my car … I knew in my mind that something could possibly happen. And it did happen.”

His mother, who had quietly moved from her secret location in the Central Valley to South Monterey County, visited and wrote to him at the Salinas jail.

She told her son she was very proud of him. During visits, she made him laugh and he began to believe their strained relationship was on the mend. 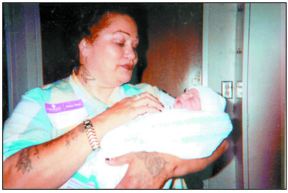 Then one day last March, Martinez heard a quick announcement of breaking news on the jail television. A 57-year old woman was killed in Soledad. His thoughts raced. His mom was 57. She lived in Soledad.

Nah, he told himself. It isn’t her.

Straining to watch the five o’clock news through his cell door tray slot, he heard his mother’s name. She had been shot and killed that morning while warming up her car.

He called out for a guard and told him, “I just found out that my mom got murdered.”

A deputy took him to call a relative but no one answered. He spent the night in his cell without knowing anything more than what he’d seen on the news.

He says he’s grateful to the classification officers who let him listen to his mother’s memorial service on a jail phone. He dialed the phone of a relative who held it next to a speaker.

He is convinced his old gang is behind her death.

“Seeing the pictures told me a thousand words. I saw the bullet holes in the back, I knew already. Execution-style from behind, you know.”

This fall, he accepted a plea deal that offered 15 to life for a murder he did not commit but felt responsible for. He took it, even though it meant pleading to a charge of second-degree murder, saying he did not want to put Javier Tovar’s family — and taxpayers — through the agony of a trial.

At his Dec. 1 sentencing hearing, he asked Tovar’s relatives, who were in the courtroom, as well as the residents of Salinas for forgiveness.

“I am sorry beyond belief, beyond any comprehension,” he said. “I would think of how unfair it was that I was free, that I was alive. It didn’t seem right.

“I’ve heard the word courage being used … The fact is, the night Javier Tovar was murdered, he was murdered by three cowards. And I was one of the cowards that was there.”

He was, he told the court, especially moved by a letter written by Tovar’s sister that mentioned the way he smiled.

“It tore me to pieces when I read it. And it should have. And the reason being is one of the things I thought about was, do they miss his smile? You know, the light in his eyes.”

Martinez says he has no regrets about surrendering, despite evidence indicating he might never have been charged if he hadn’t. His plans now revolve around making the most of his time in prison. He’s eager to set up more men’s programs and perhaps conduct academic research behind the walls.

“He has always been a leader,” says Villarreal.

Despite the stacks of letters and commendations he’s received for what many describe as doing the right thing — Martinez says he does not consider himself brave or heroic or exceptional.

“What I did is not courageous,” he insists. “This is expected behavior of anyone in our society.

“Through doing this, I’ve gained so much more. I may be given 15 to life, but to me that’s not the end of the road. What has happened inside of me supersedes it all, way more than I even expected.”

Julia Reynolds can be reached at 648-1187 or jreynolds@montereyherald.com.

Part one: The Long Journey

All contents ©2011 MONTEREY COUNTY HERALD and may not be republished without written permission.