To answer the most frequently asked question, I go by Julie and Julia — It’s usually Julie in person and Julia in print, but it doesn’t really matter. I’ll answer either way. 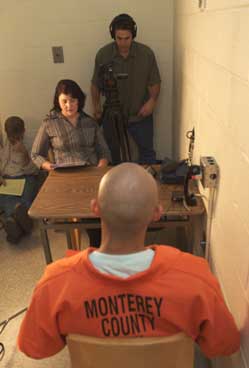 Taping our documentary, with Josiah Hooper at the camera. Photo © Janjaap Dekker.

I’m a criminal justice reporter at The Monterey County Herald, and a Center for Conflict Studies Research Fellow at the Monterey Institute of International Studies. In 2011, I was a Steinbeck Fellow at San José State University, and thanks to the incredible support there, I finished the draft of my book, “Blood In The Fields,“ published in 2014 by Chicago Review Press.

I was a 2009 Nieman Fellow at Harvard University, enjoying one of the greatest honors (and pleasures) awarded to U.S. and international journalists. As an investigative reporter, I spent the past 11 years immersed in rural gang member’s lives, producing the award-winning PBS documentary Nuestra Familia, Our Family and reporting on gangs and their FBI informants for The San Francisco Chronicle, The Oakland Tribune, and the Monterey County Herald. Over the years, I’ve investigated con artists, narco-traffickers, money launderers, sociopaths, arms smugglers, corrupt government informants and a CIA asset wanted by Interpol. I have reported for Now with Bill Moyers, National Public Radio, 60 Minutes, The Nation and other outlets, and was previously a staff reporter at the Center for Investigative Reporting. I was part of the team that created Frontline/WORLD’s Gun Runners, a much-heralded documentary project that I’ve heard inspired the 2005 Nicholas Cage movie Lord of War and became the focal point of an international campaign to stem illegal arms trafficking.