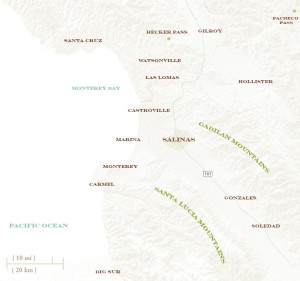 Locations in “Blood In The Fields”

Mando walked the beat alone, his nine millimeter Glock his only companion. The train tracks were the best place to sell because the cop cars couldn’t tail you here like they did over on Soledad Street.

He made three, four hundred bucks in a few hours. He’d hang till four in the morning, waiting in the shadows of the tortilla factory for lost souls to wander out, the vampires emerging from the rickety ruins of Chinatown. Between customers the night was dead. The double-decker Coast Starlight pulled north well before sunset, though an occasional freight train loaded with produce and sprayed with graffiti sometimes rattled through before dawn. Otherwise, the tracks were silent.

After Mando’s clients wandered off to shoot up, they’d slowly return to Chinatown’s corners—aging hookers and homeless junkies who loitered under the Republic Café’s ancient sign, the words “Chop Suey” flicking high above in fake-Chinese neon letters.

This sad scene was nothing like the Chinatown that sprang to life in the late 1800s, but it was a lingering testament to the neighborhood’s role in the history of Salinas gangs. The four blocks north of the tracks were the destination for Chinese workers who came for farm jobs but were essentially confined to that segregated section after their citizenship was denied under the Chinese Exclusion Act.

On top of that, California’s “Alien Land Law” said noncitizens could not own land, so for decades Chinatown swelled inside its original boundaries, a world folding and re-folding into itself. Japanese and Filipino immigrants joined the Chinese and by day the clubs and restaurants filled with white politicians and growers, who enjoyed a good meal even if they did not care to live near the men who prepared it.

Naturally teetering on the margins of the law, Chinatown was home to bordellos and gambling halls where fan-tan games, Chinese lottery, and Pai Gow poker were enjoyed in the earliest days of the American Century.

Among the fraternal support groups in Chinatown was the Bing Kong Tong Society, which lent a hand to fresh immigrants and built the first floats for the city’s rodeo parades. The tong was a business and teaching center as well as a refuge from a not-so-welcoming society.

The Bing Kong association’s rivalry farther north with the Hop Sing and Suey Sing associations achieved infamy. Those battles became known as the “tong wars” that into the 1920s wrought havoc along the Sacramento River Delta and the San Francisco Bay—and of course fed the hunger of a salacious press.

Under an agreement hammered out between two of the tongs, the associations each ran four gambling houses in Salinas, and all were popular with Chinese and Filipino field workers.

Of course the neighborhood fascinated the young John Steinbeck, as it would any boy who lived a drainage ditch away from so much vice. “I wonder,” he once wrote, “whether all towns have the blackness—the feeling of violence just below the surface. Of course it was the only town I knew. Are they all full of dark whispers? There were whispers of murders covered up and only hinted at…”

At ten years old, Steinbeck is said to have biked across the ditch and the tracks to see the bloodstains after a tong ambush, although proof of that trek remains sketchy. But as a kid he already sensed a violent assertiveness in Salinas, “an energy like the compensation for sin.”

“There was a blackness that seemed to rise out of the swamps,” he wrote, “a kind of whispered brooding that never came into the open—a subsurface violence that bubbled silently like the decaying vegetation under the black water of the tule swamps.”

It’s unclear whether Steinbeck ever saw the bar floor and the bullet holes and the blood, but the Chinatown massacre did indeed occur.

The murder plot unfurled on an April evening in 1912, when four men boarded a train in San Mateo. They sat at opposite ends of two cars, never speaking to each other. But a conductor and a brakeman noticed that two of them carried pistols, one an automatic. When they left the train that evening in Castroville, the four apparent strangers walked along the platform before they were seen gathering near a shed.

Two days later, five Chinese men were enjoying a poker game inside a Salinas gambling house at 20 Soledad Street, the heart of Chinatown.

Two of the men from the train burst into the parlor and drew pistols. One shouted to his partner, “Start shooting!” Three victims went down. When the assassins ran to the street, accomplices joined them and as they made their getaway, a fourth man was shot in Soledad Street, although no one saw who killed him.

Inside the poker room, two men survived to tell police all that they’d witnessed.

Five days after the murders, the four assailants were arrested shortly before midnight in Moss Landing, just as they boarded a car brought from Santa Cruz by a fellow tongman. All four suspects were found to be members of the highbinder society Suey Sing. Highbinder was a popular term from the time referring to hit men and blackmailers in secret societies—almost always Chinese, though the word was also invoked to describe corrupt white politicians, too.

In what was surely Salinas’s first gang conspiracy trial, all four men were quickly found guilty of murder. Defense attorneys thought at least two of the guys had been railroaded. A San Mateo police officer testified that he knew them, and saw the two in his city’s Chinatown the night of the murder. But there was also speculation that the Irish-American cop had solicited a $500 payment before making that statement.

By the 1940s everything changed. The exclusion act was finally repealed in 1943 and Chinese residents fanned into other parts of Salinas like air let out from an overblown balloon. During World War II, the neighborhood’s Japanese Americans were rounded up and imprisoned at the Rodeo Grounds before being carted off to the interment camp at Manzanar.

Chinatown became a near ghost town.

In the fifties and sixties, Mexican-American and Filipino dance halls moved in: Leon’s Club, El Faro, and later, the Copacabana. The swinging pachuco neighborhood was regularly raided by the cops, whose station was only eight blocks away, but as soon as officers issued citations and turned their backs, the sinning started up again.

In that aspect, Chinatown hadn’t changed in a hundred years.

By century’s end the brothels, card rooms and highbinders were all ghosts and although the tongs still owned much of Soledad Street’s real estate, Chinatown’s vice belonged exclusively to Nuestra Familia.

In the hours after daylight, it was Lil Mando’s turf. The junkies knew to look for his tall, swaggering silhouette, and the hookers took a moment to flirt with the handsome boy before coughing up cash for the brief salvation of his black tar chiva.

“Blood in the Fields” is Julie Reynolds’ true and epic tale of love, gangs, and the FBI in California’s Steinbeck County.

One thought on ““Chinatown” — excerpt from Blood in the Fields”