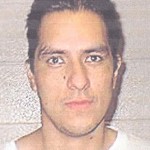 A high-ranking Nuestra Familia gang leader from Salinas was arrested this week in an FBI takedown of one of the gang’s largest street regiments, federal officials said.

“Removing dangerous drugs and violent criminals from our neighborhoods is essential to ensure a bright future for our families,” said Herbert M. Brown, special agent in charge of the Sacramento Division of the FBI. “Takedowns such as these demonstrate that the FBI and its task force partners are committed to disrupting violent gang activity and improving the quality of life in our communities.”

Larez was one of two high-ranking Nuestra Familia captains who were released from federal prison in 2010. He and Henry “Happy” Cervantes, 48, both faced life sentences in the FBI’s sweeping Operation Black Widow conspiracy case in 2000.

Instead, they received 10-year sentences in a plea deal negotiated by the gang’s leaders after problems surfaced with case’s star witness and his role in a murder at Cap’s Saloon in Salinas.

Since then, law enforcement officials feared that when Larez and Cervantes were released from prison in 2010, they were given marching orders by the generals, who are serving life sentences in a Colorado federal prison.

Police say the gang has been undergoing an internal power struggle because one group of leaders was sent to federal prison in Colorado after Black Widow, while a newer group of leaders in Pelican Bay is trying to exert its control over cities like Salinas.

Larez and those arrested in last week’s raid all answer to the Colorado generals, federal officials said.

Cervantes was arrested late last year and charged with murder in the stabbing deaths of two men found in a burning Oakland apartment.

In addition to the arrests, FBI officials said Thursday’s operation involved the seizure of drugs, cash and vehicles, including about 25 pounds of methamphetamine, 40 pounds of marijuana, and cocaine, heroin and oxycontin; about $35,000 in cash; 12 cars, including luxury brands such as Lexus and Cadillac; and about 30 weapons as well as ammunition.

Seems like years since I first reported on this case (actually, it has been), but here’s some big news:

I was as shocked as anyone to learn that Alex Sanchez, former-gangster-turned-outreach-worker and head of Homies Unidos, was indicted this summer in a federal RICO case for allegedly still calling shots with MS-13 gang members.

I was even more shocked to read Tom Hayden’s unbridled defense of Sanchez in several articles for The Nation, and his comparison of the case to the Sleepy Lagoon murder scandal that set the sour tone for LAPD-Latino relations for decades to come.

I was mainly shocked because Hayden wrote the pieces before he even read the wiretap transcripts used to indict Sanchez.

Not that I know for sure one way or another whether Sanchez is guilty or not of plotting the murder of some guy called Camarón in El Salvador. But I did read the prosecutors’ translated transcripts of Sanchez’s phone conversations with his homies.

Yep, there’s enough fudge room in the translation of street-slang Spanish to raise doubts about whether Sanchez and friends were seriously trying to have the guy killed. And there’s also enough there to see it the feds’ way: Sanchez definitely had some hard-core problems with this dude and was not seeking the path of peace.

So to read Hayden’s critique of the feds’ view of the conversations before he had all the facts was surprising. But it shouldn’t be. Hayden and I once clashed, and the topic was gangs.

We were on a panel in Los Angeles, where Hayden and the beloved Father Greg Boyle both “ganged up” on me, if you will. I was trying to explain the family-oriented nature of our rural Norteño gangs when they accused me of being a typical reporter by sensationalizing the “anomoly” of a boy who was raised to be a Norteño.

Well, I of course adore Father Greg (didn’t care either way about Hayden) and so left not only broken-hearted but bewildered and angry. The entire panel revolved around LA’s interpretation of what street gangs are and how they work — while our little Northern Cali backwoods gangsters didn’t even rate a place at the gang-discussion table.

In fact, we, the supposed grown-ups, were acting just like gang kids. Defending our turf. Or maybe we were more like the mothers and fathers of gang members, the parents all of us in this field meet every day. You know, the ones in complete denial. My son a gang member? Never!

Denial is how this Alex Sanchez thing smells to me, an automatic defense of turf before the facts are in. Granted, I am a few hundred miles away. Some people I really respect really respect him. I want him to be innocent. I’d surely jump to the defense of one of my colleagues if he were indicted by the feds, especially if it was someone I truly believed had changed.

I also know more than a few people who paradoxically do good work to keep kids away from gangs but still keep a toe in the mix themselves — so it’s not at all far-fetched that Sanchez could be doing the same.

I wish I had enough faith in our federal courts to believe the truth will come out in trial. But that’s not how RICO cases work. In gang conspiracy trials, “vague” is too often the name of the game. I also believe (and have amassed some evidence for a future story) that the FBI has consistently over-hyped the threat posed by MS-13 to near hysteria levels.

And so we may never know whether Sanchez wanted to have Camarón killed.

I do know enough from reading his vindictive words that I probably wouldn’t want him to mentor a troubled kid I care about. He may or may not be guilty of conspiring to commit murder, but we should all acknowledge that — at least in those conversations he thought private — he spewed hate and vengeance and was no peacemaker. It’s hard not to sense he was disingenuous at best.

I hope in the big picture that I’m wrong, that this was a momentary lapse of judgment in otherwise radiant turnaround. If I am, I’ll send Hayden a bunch of flowers. Hell, an olive branch.

PS. The language police want Hayden and The Nation’s copy desk to note that the dead guy’s street name is Camarón (Spanish for shrimp) and not “Cameron.”

The Center for Investigative Reporting and Latino Public Broadcasting‘s award-winning film about a father, a son, a gang and the FBI.
Co-producer, lead reporter, writer